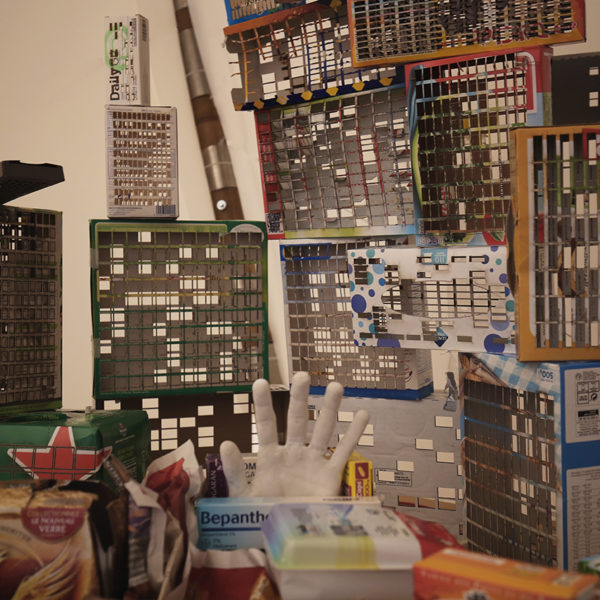 « Fran, Steve, Peter et les autres » is a space that is approached from the outside and the inside. At the beginning, projection surfaces where an animated and glittering city is drawn, the room incites to go to the other side of the screen and then to go beyond the images. By slipping under the volume, the spectator realizes that he can sneak in to physically enter the art piece to access to another reality.

The city unveils itself and shows its rubbish. The multitude of packaging is rithmed by the lights that outdo the colours and messages already present on the boxes. Glare or blindness ? The piece switch from one world to another, putting under our nose the piles we don’t want to see. Composed by objects that we pick up and throw away every day and by hands that seem, gripped by desire, rise up and grab hold of them.

With a cinematic twinkle in its eye, the installation invites the audience to slip into the shoes of Fran, Steve and Peter, characters from Romero’s horror film « Dawn of the Dead ». Trapped in a shopping mall during a zombie attack, they survive by barricading themselves and consuming. Fran, however, will try to escape without any real escape route. Does horror really come from zombies ?

Beyond the object, « Fran, Steve, Peter et les autres » creates a moment, an experience in which the spectator’s body invites and participates. The lights react and activate to the ambient sound. Bending to enter the box, the spectator becomes an actor of the installation. Thus enclosed in the volume, only his legs appear, producing for the spectator outside the work, a cut-out where the box seems to have a thousand swarming legs. The presence of the bodies animates and embodies the piece.

« Fran, Steve, Peter et les autres » questions our constructions in their most fascinating and repulsive aspects. An eminently cinematographic work, it plays with its codes, going through the first illusion effects, in reference to the first dioramas, and questions our relationship to the screen, images, messages and the new 3D virtual realities we are entering. From wonder to nightmare, the installation takes the audience to see the other side of the set.

Work created in collaboration with Alice Martins and Nicolas Tilly.